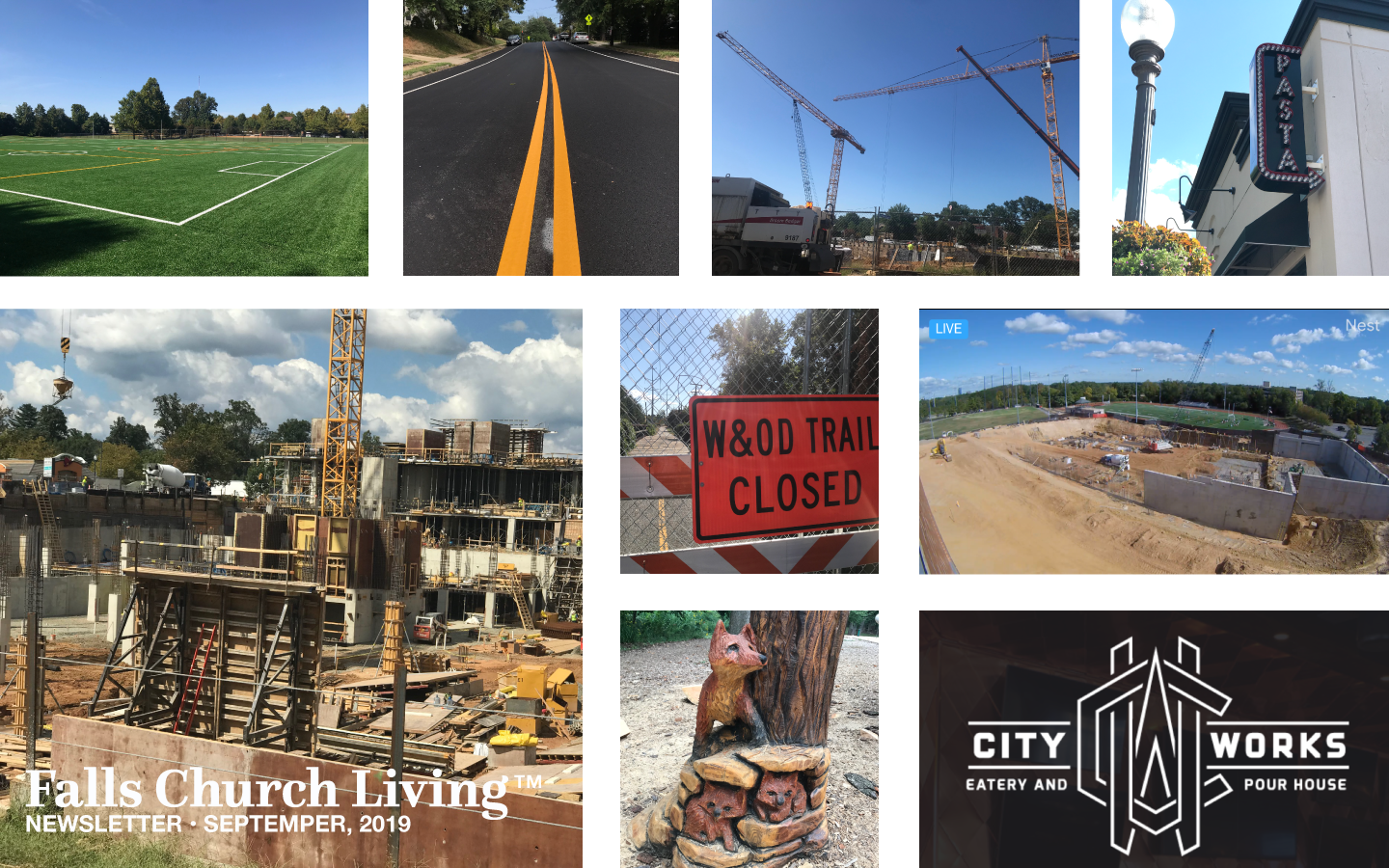 Welcome to the official start of Fall! Though the weather hasn’t shown up yet, schools are officially back in session, we’ve met the teachers, are getting into the groove with morning routines, traffic patterns and practice schedules.

Well, amid the travels of summer and the adjustment back to bus routes and full works schedules you may have missed some of the happenings around our beloved Falls Church. You may have been confronted with changing traffic patterns and wondered what exactly is going on and when it will end. Or perhaps you missed the opening, or closing, of a restaurant or two. So, this months Falls Church Living Newsletter is here to help catch us all back up to speed on some things we all may have missed this summer, we might have questions about, and what’s coming up this Fall! It’s far from exhaustive, so please feel free to mention any updates or questions impacting life near you.

Progress at the intersection of Route 7 and N. West St. continues as the digging has come to an end and there are now two permanent construction cranes setup on the site. Now for the long wait for progress to return to surface level before things quickly go vertical. Anticipated delivery remains June 2021 for the mixed use site.

DID YOU KNOW? You can preview one of the future Founder’s Row restaurants for yourself? City Works Eatery and Pour House will be one of the incoming tenants from day 1. You can give them a look ahead of time by visiting their Tyson’s location. Don’t worry too much about spoiling any future fun, with 90 beers on tap there will still be plenty of exploring to do once the Founders Row location opens.

NEW GEORGE MASON HIGH SCHOOL
Construction of the new George Mason High School is well underway with the initial dig complete and initial foundation work underway. There is still a ways to go, but did you know you can watch the progress in real time through the school’s live stream? Anticipated delivery of the high school building is December 2020, with move in occurring over the holiday break. Athletic field work will continue through August 2021. No time will be wasted on phase 2 of the project, with demolition of the current high school slated for early 2021, making way for the commercial redevelopment of the 10 acre site.

Late last year the Falls Church City Council approved an agreement with, including funds from, the Northern Virginia Transportation Authority to transform the section of the W&OD trail from the foot bridge over Rt. 7, to just past Little Falls St. toward Arlington. This stretch will be transitioned from a single, 10’ wide trail, to one 11’ wide bike trail and a second 8’ wide pedestrian trail. Over the last several weeks work on this expansion has begun, and the first trail detour opened last week. The completion of the expansion will closely coincide with the footbridge being constructed over Lee Highway. Despite what looks like significant progress at the footbridge site, both projects are not expected to be complete until Fall 2020. A while from now, but notably in plenty of time for the opening of Founder’s Row.

UPDATE 10/1/19: A very gracious City Council member brought to my attention the trail expansion to separate pedestrian and bike lanes is still in design, engineering, and public input phase. The project completion timeline is unknown at this time.

TOO EARLY TO THINK SUMMER 2020?
Not if you’re a regular Metro rider. As the rebuilding of several Metro stations this summer came to a close in the last couple weeks we should remember this was just phase 1. Phase 2, to begin next summer, will include the Vienna, Dunn Loring, West Falls Church, and East Falls Church stations. If you are an Orange Line Metro rider it may not be a bad a idea to extend those 2020 vacation plans, and start working on your car pool arrangements for when you ARE in town.

If you are up for navigating the above mentioned trail detours, it may be a good time to invest in a decent commuter bicycle, or to dust yours off. As it happens, after their big Labor Day sale, several Spokes Etc. locations may have some solid used bicycle inventory. Recommend calling one location with what you are looking for, and if they don’t have it, they will call the others for you.

NEW BRIDGE IN JUST ONE WEEKEND
It wouldn’t have been hard to miss this one over the summer. First, it was in 7 corners, which many often avoid anyway. Second, in just 54 hours VDot demolished and replaced the bridge in Seven Corners that leads to Wilson Blvd. In the time since, the crane involved has been lovingly named “Steve” by admirers on Facebook. If you saw it, it is certainly worthy of it’s own name. While “finishing touches” are ongoing at the site, Route 50 and the bridge above went from closed at 10pm August 2nd, to demolished and replaced in time to be open for rush hour Monday August 4th. Rather proud of themselves, VDot posted a time-lapse that you can view here.

PIMMIT HILLS GETS A MAKEOVER
A long overdue repaving has been completed in Pimmit Hills (neighborhood behind the Trader Joe’s on Rt. 7.) and it was utterly transformational. As the neighborhood continues a rapid transformation from smaller homes to newly built larger homes the refreshed streets add a polish that makes the newer homes look a little more in step with the neighborhood, while simultaneously improving the marketability of all homes.

FOR THE (YOUTH) SOCCER FANS

We’re close to saying goodbye to many of the weather related practice and game cancellations in the Falls Church Youth Soccer league as the installation of artificial turf at Larry Graves Park is now complete. The new field is supposed to be ready for use this week. While Larry Graves is co-owned by Fairfax County and the City of Falls Church, the turf field was funded by the city, which often struggles to manage the conditions at its heavily used Madison Park.

The new field scheme includes 4 small fields for K-2nd grade soccer overlapped by 2 larger fields for the older grades, and a lacrosse field over top of the entire space. I’ve seen it for myself, and it looks sharp.

FOODIE CORNER: WHAT CAME AND WHAT WENT THIS SUMMER?
Not to be overshadowed by excavators and traffic cones, some notable openings, and closings, occurred over the summer. In August Thompson Italian opened it’s doors in the former Argia’s location in Falls Church City. Said to be Modern American through an Italian lens and kid friendly Thompson Italian was started by husband and wife culinary duo Gabe & Katherine Thomson.

On the other side of the of culinary notables was the closing of Mad Fox Brewing Company. A centerpiece of the Falls Church Food scene for several years, the restaurant and brewery was not able to keep pace with offerings such as Audatious Aleworks, Falls Church Distillers, and the Dominion Wine & Beer upstairs tasting room.

Not to worry, other Falls Church watering holes such as Clare and Don’s and Dogwood Tavern seem to be plugging along just fine. While representatives in Falls Church City have stated an interest in replacing Mad Fox quickly, ideally with a similar brewery type model, the forthcoming Founders Row already has such a restaurant, City Works Eatery and Pour House (mentioned above), slated for that project.

That said, I personally believe the former Mad Fox space would be ripe for the 7 Corners Dogfish Head to be relocated OR, to keep the brewery equipment for show, and bring a walk-able Italian Store location to Falls Church (can I get an Amen?!). After all, there’s plenty of space to park a classic Vespa or two!
NATS START SLOW, SWELTER IN SUMMER, AND NOW STUMBLE INTO FALL

After a groggy first half of the season the Nationals were one of the better teams in baseball from the All Star break through August. Though they lost some steam in September they are still given a 98% of earning a playoff birth. It would be their first in the post Bryce Harper era. The Phillies on the other hand are sitting with a 0.1% chance of making the playoffs.

Part of the seamless success for the Nationals has been production from Juan Sotto, who by season’s end this week will likely have more combined runs and RBIs than Harper had in any season with the Nats, including his MVP year. Sotto goes went into Monday night’s game against the Phillies with 107 of each, needing just 4 more of either (or a combo of both) to surpass Harper’s best year. Next has been the performance from Anthony Rendon, who has firmly placed himself as one of the top free agents going into this off-season.

WHAT DID I MISS?
That’s all for my summer recap, and Fall update. What did I miss? If there are updates from your neighborhood, or items I didn’t address that you have questions about please let us all know!