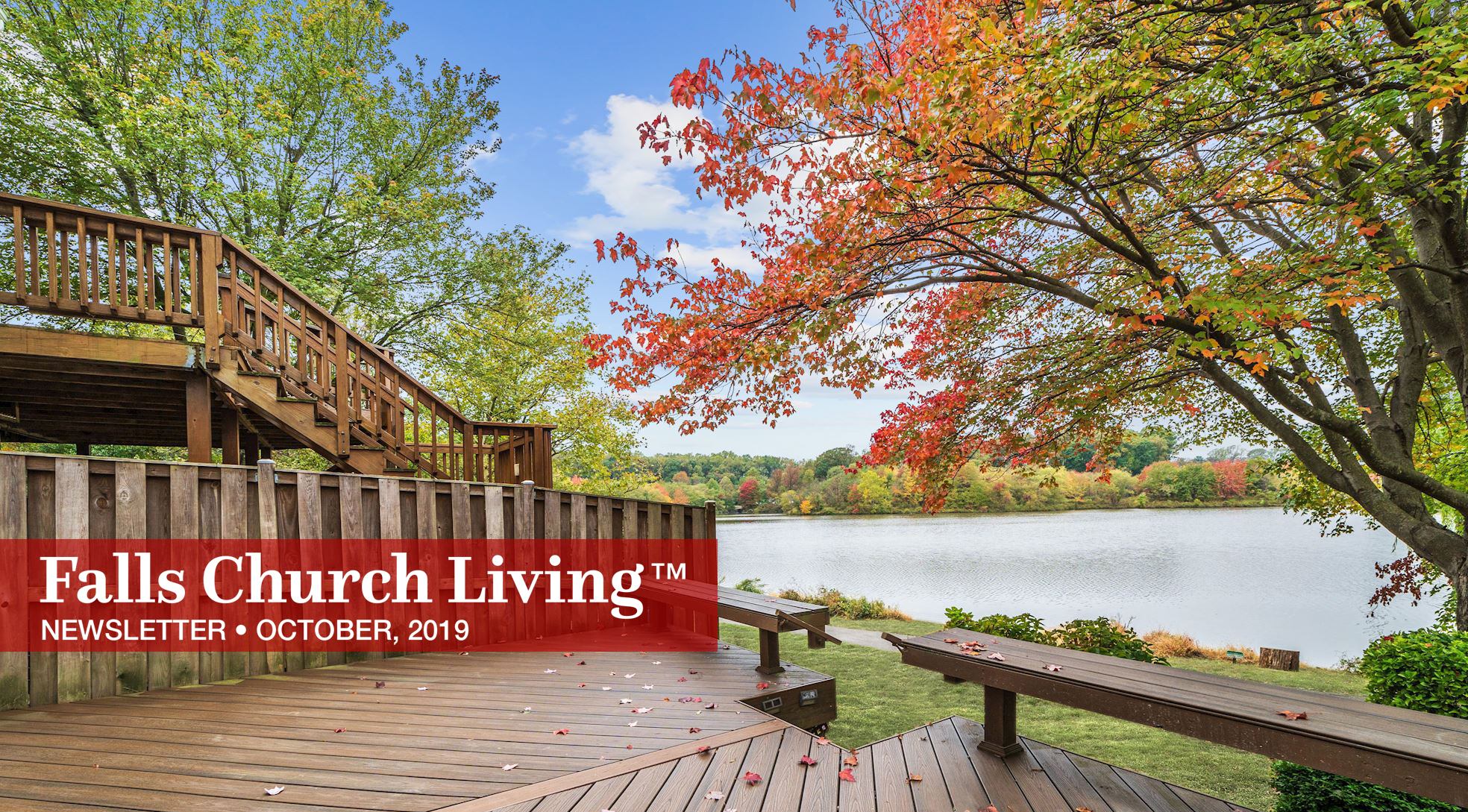 Throughout Falls Church and our neighboring communities the Spring real estate market was riddled with stories of multiple offers, price escalations over $100,000, waived home inspections and appraisals, and open houses overflowing with visitors. We were in the midst of the slowest market for inventory in the last 10 years, yet home sales were continuing at their normal clip, and even at a higher rate in some cases. A recipe for a home buying frenzy if there ever was one! This dynamic left many would-be home buyers scrambling for short term rentals or hanging up their Redfin App until next Spring.

As we look at the journey of Falls Church real estate from Opening Day, to the end of the World Series (Go Nats!!) we can now glance in the rearview and see just how sluggish housing inventory has remained throughout the entirety of 2019 so far, what that has meant for our market, and what that means for Spring 2020 (besides a championship banner ceremony at Nationals Park!).

WHAT WE’RE SEEING OUT IN THE MARKET
The Fall market is typically a decent time to shop for a home with a fresh swell of housing inventory once the summer wraps up, but a smaller crowd of home buyers. This year however, much like the Spring, inventory has deviated substantially from the norm, and many who came up dry in their home search during the Spring and Summer months are still in the buyer pool. While this hasn’t meant every home is selling in the first weekend, Average Days on Market throughout all Falls Church zip codes was down over 34% in September compared to September 2018. Looking at Falls Church as a whole, however, doesn’t tell the entire story. We have to break things down by zip code in order to unpack some significant nuance. You can read it all, or quickly jump to your zipcode here:

22041
In 22041 average days on market for September dropped 63% compared to September 2018. Amazingly, even that low number was a 75% increase from the mere 12 days on market average from August. It should come as little surprise then that prices in Lake Barcroft are up 10% on the year, with prices in September up 27.5% compared to September 2018. At the close of September there were 17 homes or condos available compared to a 5 year average of 62, and the months of housing supply was at just 0.6. At the time this newsletter was being written the available homes as we near the end of October was also 17, with 30 homes under contract, 18 of which were under contract in under 14 days. The current 17 homes and their growing days on market tell some of the other side of the story from throughout 2019. Despite the tight inventory, it has not been a market where you can sell anything at any price. Buyers have remained selective and have been willing to pass on options that are either priced above market, or have some adverse feature, be that location condition, or both.

22042
For 22042 the signs of what was to come in 2019 came early. In January closed sales were up 42% year over year, while active listings were down 41.2%. It took until August to have a month close out with more available inventory than closed sales, and September was the only month all year so far to close out with more Active homes than the previous year. If October wrapped up today, inventory would be back down by about 20% compared to October 2018. Despite the brief climb in listings, days on market was down 44% year over year in September, and looks to have a similar, if not greater drop for October. Nonetheless, what I stated about the other side of the story for 22041 still holds true. Buyers remain selective, and not everything is selling at the drop of a hat.

MIND BOGGLING STAT: Year to date average days on market is down 51.1%

22043
Though 22043 has experienced tighter inventory in 2019 as well, the numbers have not been nearly as gaudy by comparison, and the impact on other variables has been less dramatic. Compared to the low days on market of 12 in August for 22041, the lowest average we have seen for 22043 was 33 days in July. While it’s notable in that it was down 43% from July of 2018, an average of over 30 days would mean there has been less pressure on home buyers in 2019 than in other zip codes in. Nonetheless the consistent drop in market times throughout 2019 should not be overlooked. There is no hard data to prove the point, but there is a good chance part of the reduction in market times stems from Marshal High Schools ranking of 6th in the state earlier this year by U.S. News & World Report. The current estimate is that October will close out with inventory down about 37% compared to October 2018

MIND BOGGLING STAT: 5 of the first 9 months had market times down 20% or more.

22044
Similar to 22042, 22044 got out of the gate in 2019 with early signs of what was to come, with inventory down 66.7% in both January and February. May, of all months, was the least favorable for home sellers, with inventory only down 25% year over year (the closest spread so far in 2019), but with closed sales also down 50% compared to May 2018. Even though average days on market has been climbing again so far this fall, September days on market (39 average) was still down 48% compared to the same period last year, which is also well below the 5 year average of 58 days for September.

22046
22046 is always a tough one to break down because of the split between Fairfax County based activity and the remainder covering the vast majority of Falls Church City. Nonetheless, 22046 bucked the inventory trend at the start of the year as Active listings were up 45% overall, and up a whopping 83% in Falls Church City compared to 2018. Not surprisingly in March, which is when many of those homes would have gone under contract or closed, days on market was up over 51%. Particularly since mid summer the year has similar that of the other zip codes with inventory down 48.9%, 51.1%, and 65.4% in July, August and September.  As for September, average days on market actually went up by 6.8% despite exceedingly few options on the market. When we look a little deeper, however, we can see that stat is misleading. If we remove one outlier, in this case a unique home that was on the market for 331 days, the days on market for the remainder of the homes was down 25% compared to the same period in 2018.

While not shown in the current data, if we were to close out the month of October now there would be a roughly 42% drop in Active Listings in all of 22046 compared to October last year, and down 69% in the Falls Church City.

MIND BOGGLING STAT: Days on market for condos have been down over 60% three times so far in 2019. They say the condo market is the first to go if the housing market is going to take a turn, so by the that metric it looks like we’re doing just fine!

FALLS CHURCH CITY
The City of Falls Church operates to the beat of its own drum, so we should pull in a little more closely for at least a quick look. For a start, with inventory down 13% and 29% respectively in April and May, but with a 63% increase in closed sales in May, there just weren’t enough homes to go around in the Spring. The Fall, like in other locations, has not provided the opportunities for residual Spring/Summer buyers that we had hoped. September closed out with just 13 available listings (across all home types combined) against a 5 year average of 29. Currently there are just 9 homes available compared to a previous 10 year low of 19 for October, three of which are new construction priced between $1.4 – $1.6m. Year to date prices in the city were up about 9.3% when we crossed into October.

A LOOK AHEAD
The two big questions I have been asked often are 1:What does this all mean for the Spring 2020 market?, and 2: Is this crazy market of bid wars and rising prices sustainable?

1: No one can say for sure how the Spring 2020 Market will play out, but with so many carryover home buyers likely jumping on the early inventory I could see things getting off to a pretty hot start, possibly as early as February. We can expect a continued wave of migrating younger folks who have started families and are now looking for townhomes and single family homes in more suburban areas. If inventory behaves similarly in 2020 the backlog of home buyers could become fairly extreme, putting significant upward pressure on prices. Many of these migrating buyers can’t afford the premium prices of Falls Church City, so surrounding neighborhoods should continue to see a boost similar to what we saw this year. Should inventory behave in a similar fashion to 2019  While it will also be an election year, election cycles have far less impact on the real estate market than they used to, due in large part to the immense growth in home prices we have had since 2000. Yes that will have been 20 years ago come Spring, but then you could buy a cape cod in Falls Church City for around $200,000, a home that would sell between $800,000 – $1,000,000 today. These prices mean many elected officials and staff teams opt to rent in the D.C. area and travel to their home state, where more and more families remain,  more often.

2: As for the sustainability of our market dynamics, while affordability is a problem for many, and the struggle is spreading as Tysons, Reston, and other communities continue to explode in their development, it remains that there are just not enough homes for everyone that wants one. This year’s inventory shift aside, roughly 300,000 additional jobs are expected in the DC Region by 2025, and over 900,000 new jobs are expected by 2045, estimates that were published before Amazon’s HQ2 announcement, so those estimates could rise as other companies look to create a larger presence in the region. On top of the population growth those jobs will bring, the existing population is migrating from city living to the suburbs, and the majority are in search of single family homes. Yet another variable putting a squeeze on things is a growing trend for empty nesters to stay put in their existing homes rather than relocate or downsize, creating even few options for the increasing number of people who are looking. In the end our trajectory is more in the direction of New York or San Fransisco rather than a leveling offer, and certainly rather than a reduction in prices anytime soon.